Stroke and the eye

Patients with visual loss of vascular aetiology such as Transient monocular blindness, CRAO, or BRAO may have up to 19.5% risk of concurrent ischaemic stroke, even when there are no other neurological deficits. These strokes were detected acutely with brain MRI using DWI but were missed on CT. They should be rapidly seen in a TIA clinic. [6]

The optic nerve is an extension of the central nervous system and shares a similar vascular supply. There are a number of ophthalmic vascular syndromes to be aware of. There are links here to other useful pages which are Migraine which is a common cause of recurring transient visual symptoms which may extend beyond the eye and also Giant cell arteritis/Temporal arteritis a vasculitis affecting the blood supply to the optic nerve which needs rapid diagnosis and treatment. One intermittent error is the misdiagnosis of a hemianopia as an ocular problem by the inexperienced. Testing by confrontation or formal visual field testing quickly clarifies this. A homonymous hemianopia is due to a destructive hemispheric lesion which may be stroke or an alternative cause and requires urgent brain imaging. 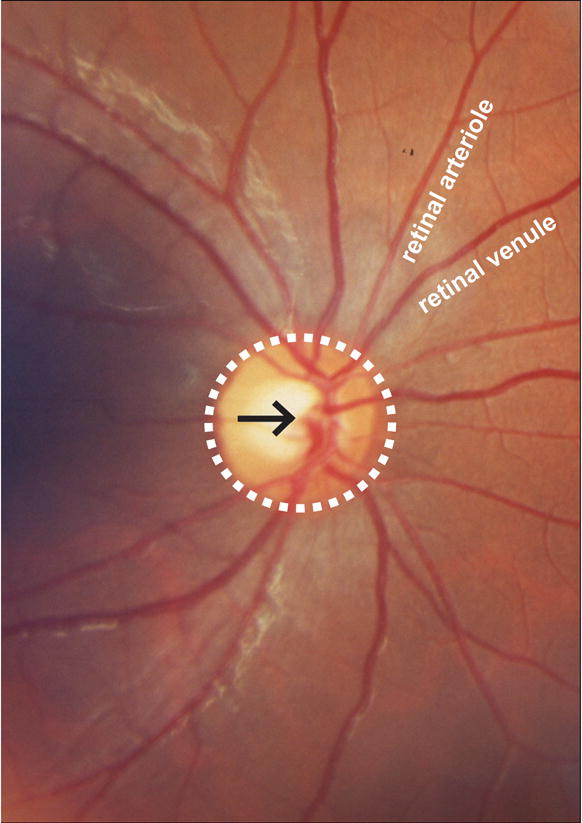 Vascular Physiology of the Eye

The retinal circulation is unique compared to other vascular beds in the human body in that it does not have autonomic innervation, and therefore is controlled by local and circulating factors such as local metabolic demands, blood pressure, oxygen and carbon dioxide levels. It can therefore be a marker of low blood pressure but then symptoms would be bilateral. The fractional oxygen extraction in the retinal circulation is high. In contrast, the majority of the blood supply to the retina is carried via the posterior ciliary arteries to the choroidal circulation, which supplies the retinal pigment epithelium and outer sensory retina. It has a comparatively low oxygen extraction fraction [1].

TMB is the most common form of acute retinal arterial ischaemia; the incidence of transient monocular vision loss has been estimated to be approximately 14 per 100,000 people per year, while the incidence of CRAO is much lower at approximately 1-2 in 100,000 [3]. As I mention below the aetiology for TMB is much wider than that for CRAO.

There is acute, painless, and persistent visual loss due to retinal ischaemia from interruption of retinal arterial blood flow. There may be a smaller visual loss may only involve a portion of the peripheral field of vision if a branch vessel is occluded. It may be preceded by episodes of transient visual loss called amaurosis fugax and it can be a marker for ipsilateral carotid stenosis. Amaurosis fugax comes from a combination of the Greek terms "amauroun" (to darken) and the Latin "fugax" (fleeting). There is retinal oedema and then usually within 7 days of occlusion of cherry-red spot, retinal opacification and whitening in the posterior pole, and vascular attenuation (i.e. "boxcarring"); after 7 days, findings include retinal arterial attenuation and development of cilioretinal collaterals, with eventual optic atrophy. Definitive diagnosis by fluorescein angiography demonstrates the arterial occlusion. If patients present early then attempts to dislodge the clot may be undertaken. These patients should be referred as a matter of urgency to the stroke team once their immediate ocular problem has been dealt with. It is important that Ophthalmology have access to the fast track TIA service and know how to refer. The difficulty in the TIA clinic is that the differential for transient monocular visual loss goes beyond vascular causes and in many cases the diagnosis is difficult and there can be a concern of over diagnosis. It may be simple blurring of vision and simply a loss of acuity which may be simply due to local eye factors. Whereas CRAO is a provable diagnosis TMB is like TIA a much softer diagnosis and context and risk factors must play a part in diagnosis.

CRVO is a condition where there is venous obstruction to the retinal venous system. This can result in a sudden painless reduction in visual acuity which may be total or related to a visual field. There may be retinal ischaemia. It can involve the central vein or its branches. Risk factors include glaucoma, hypertension, diabetes mellitus, hyperlipidaemia, hyperhomocysteinemia, coagulation disorders, and rarely systemic inflammatory conditions such as Bechet's syndrome, PAN or Sarcoid. Diagnosis is based on history and fundal exam which can show Optic disk oedema, Macular oedema, dilated and tortuous retinal veins proximal to the obstruction. There may be widespread deep and superficial haemorrhages (dot-blot and flame-shaped) as well as cotton-wool spots an even neovascularisation in advanced cases. Fluorescein angiography can identify the site and presence of macular oedema and any neovascularization. Fundal findings may be regional or global. Management includes intravitreal corticosteroids, intravitreal anti-vascular endothelial growth factor agents, and laser photocoagulation. Those with non-ischaemic (well-perfused) CRVO and good visual acuity on presentation (better than 20/40, corrected), have a more favourable prognosis. There is no need for a stroke team referral. There is no doubt that those with CRVO are at increased risk of stroke. People with RVO are at a significantly greater risk of developing stroke, ischaemic stroke, and haemorrhagic stroke. However, RVO does not significantly increase the risk of all-cause mortality [2]. However the relevant vascular risk factors can be dealt detected and dealt with by ophthalmology and primary care.

Rare condition characterized by transient vision loss due to retinal ischaemia resulting from occlusion in either the common or internal carotid artery. Patient experiences loss of vision and Fundoscopy shows dilated, irregular retinal veins and sometimes retinal haemorrhages. Patients may present with dull or aching ocular or periorbital pain due to underlying ischaemia. Dilated veins are not tortuous. Fundal haemorrhages typically are at the midperiphery and there is no disk oedema, whereas disk oedema is characteristic in central retinal vein occlusion and present sometimes in branch retinal vein occlusion. Definitive diagnosis is made via Doppler ultrasonography or carotid angiography.

Anterior ischaemic optic neuropathy (AION) is due to ischaemic damage to the optic nerve head as it enters the retina which causes disc swelling. If the ischaemic damage is more proximal in the nerve there is no optic disc swelling and it is termed a Posterior ischaemic optic neuropathy. Anterior ischaemic optic neuropathy causes a loss of vision due to infarction of the optic nerve. The patient may have a mild to severe visual loss which is often altitudinal so that superior and inferior half fields are gone, field defects and a pale swollen optic disc. It can often be noted on waking. With AION the Fundus shows a pale optic disc with swelling, there may be flame haemorrhages on the swollen disc or nearby neuroretinal layer, and sometimes with nearby cotton-wool exudates. The visual loss comes on suddenly acutely but may progress over days. It may be permanent but some can improve over weeks or months. It is though that the vessels affected are the posterior ciliary arteries which feed the head of the optic nerve. One cause is Giant cell arteritis / Temporal arteritis and this should be looked for as an eye emergency. In others the cause is simply microvascular disease. AION seems commoner in those with a small to disc ration of the optic disc presumably as the fibres are bunched tighter. Risks factors include Hypertension, atherosclerosis, Sleep apnoea, Diabetes mellitus, migraine and Carotid disease and local causes such as venous outflow obstruction or elevated intraocular pressure or anaemia or BP drop. The differential includes CRVO and Papilloedema and optic disc drusen.

Please see article on Giant cell arteritis/Temporal arteritis which is the commonest cause. Others include Polyarteritis nodosa and SLE. There is usually evidence of a vasculitis with raised CRP and ESR and systemic features. It tends to be a more extensive and severe than the non arteritic form. Indeed it can go on to affect the other eye if untreated. Visual loss with GCA (Arteritic Ischaemic Optic Neuropathy) is usually worse. Some texts quote GCA as causing episodes of amaurosis before blindness which appears not to be a feature of Non-arteritic AION.