Cerebral Venous (Sinus) Thrombosis (CVST) refers to thrombosis and occlusion of venous or venous sinus channels in the cranial cavity. It is rare causing less than 1% of strokes. Classically the patients are young, female and procoagulant - pregnancy, puerperium, inherited thrombophilia, on OCP but all ages and both sexes are at risk. The presentation can be subtle. You need to consider it to get a CTV or MRV to diagnose it. CVST can cause cerebral haemorrhage as well as infarction. Where there is a venous prothrombotic state and new central neurology one should always ask - could this be venous thrombosis. Always consider in those with new persisting central neurology and/or headache in pregnancy or the puerperium. If it enters the diagnostic differential, then imaging should be seriously considered, and anticoagulation started once diagnosis confirmed. Greater access to MRV has resulted in increasing diagnosis of cerebral venous disease and recognition that it is commoner and there may be milder forms.

CT with contrast showing Superior Sagittal Sinus thrombus with Empty Delta Sign. Note that the lateral sinus may be congenitally absent and reflects underlying anatomy rather than thrombosis. Anomalies of venous anatomy seen in 50% 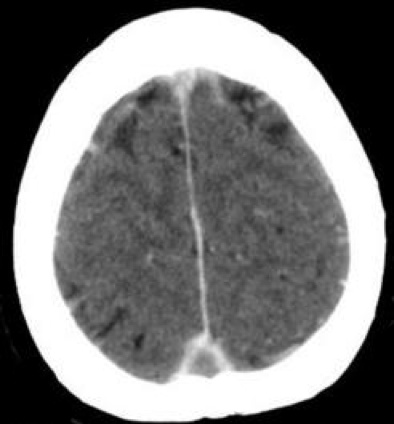