Cerebral Small vessel disease accounts for about 25% of the causes of Ischaemic stroke and over 40% of the cases of dementia. It is recognized as a major vascular contributor to dementia, cognitive decline, gait impairment, mood disturbance and stroke. It is commonly seen in elderly on CT/MRI but there is a wide disparity in neuroimaging appearance and clinical findings which can range from nothing to mild cognitive impairment to dementia or gait dyspraxias and more. It is also the main underlying pathology for deep bleeds which are discussed in the chapter on haemorrhagic stroke. It is closely associated with Hypertension Small vessel disease cannot be imaged in vivo so we use surrogate markers - namely lacunar infarction and deep haemorrhages as evidence of its presence.

This classification and table need not need memorised but what is important is to realise that small vessel disease is multifactorial with a broad differential and is in reality a number of pathological processes all affecting the small penetrating vessels.

Clinically the effects are often subclinical but slightly larger occlusions can lead to lacunar infarcts which can certainly present with the classical lacunar syndromes discussed elsewhere. A more piecemeal damage can lead to a progressive vascular dementia, Gait apraxia and vascular parkinson's as deep white matter is affected as well as subcortical nuclei and their connections. 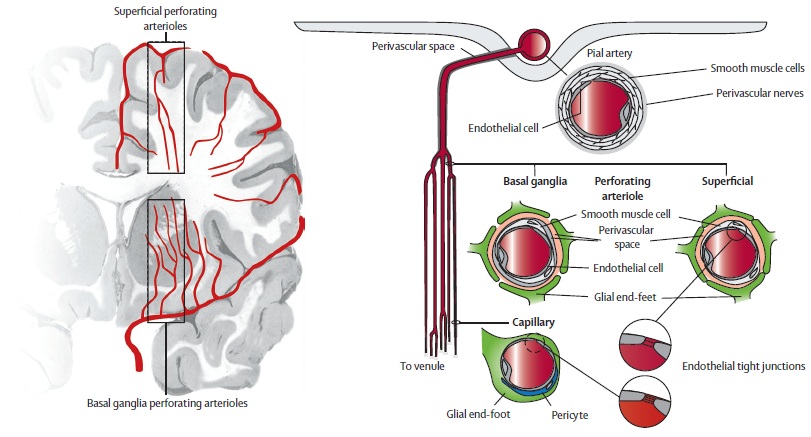 It is useful to be aware of this classification but it is not used commonly in clinical practice. It is used to quantify the degree of white matter T2 hyperintense lesions due to presumed SVD. It is the most common system. It is not generally used in clinical practice or in reporting. Some prefer to comment as 'mild', 'moderate' and 'severe' being favoured. The scale divides the white matter in periventricular and deep white matter, and region each is given a grade depending on the size and confluence of lesions