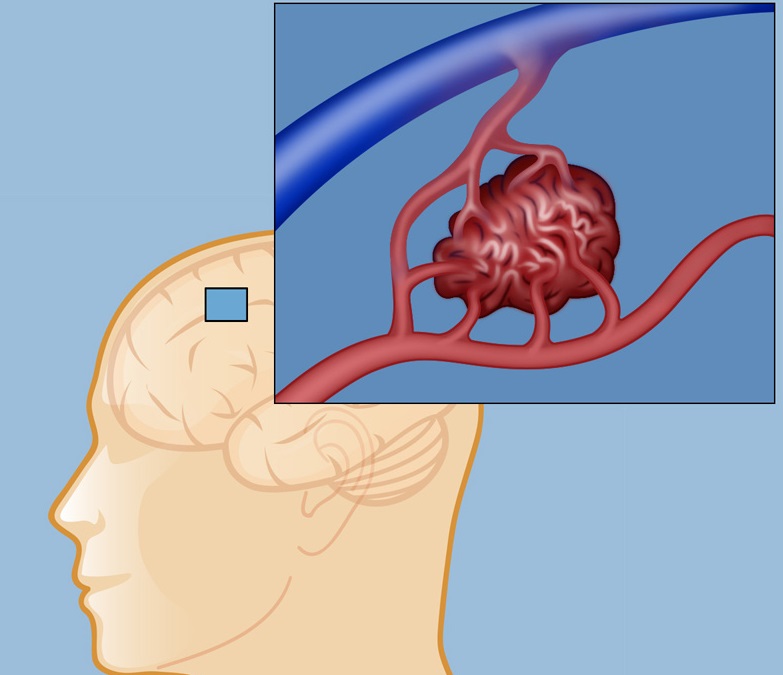 It is probable that AVMs develop during embryonic or fetal development and are usually present at birth. One suggestion is that they may develop around the 29th week of gestation from remnants of vessels between arterial border zones. An arteriovenous malformation is made up of an arterial to venous tangle of vessels which are neither arteries or veins but without the usual intervening capillary bed which protects the venous side from exposure to systemic blood pressure. This causes increased arterial flow unimpeded by the usual vascular resistance and increased venous outflow. This misdirection of arterial blood can lead to a steal phenomenon from localised brain. Imaging needs to look at the AVM and surrounding brain. The central coil of vessels is called the nidus. A high pressure within the nidus of the lesion is associated with an increased risk of bleeding however usually AVMS are regarded as high flow and low pressure in part due to the absence of a capillary bed and low vascular resistance. They can be found anywhere in the brain as well as the spinal cord and dura and surface of the brain. Here we will focus on those in the brain (bAVMs). The main concern is that they lack the normal steady reduction of blood vessel size and the normal fall of vascular pressures across the vascular bed and so the venous side is exposed to higher arterial pressures resulting in damage and haemorrhage and oedema.

Inherited Conditions with a predisposition to AVMs

The Spetzler-Martin Grading System assigns a score of 1 for small AVMs (< 3 cm). The eloquence of adjacent brain is scored as either non-eloquent (0) or eloquent (1). The venous drainage is scored as superficial only (0) or including drainage to the deep cerebral veins (1). Scores for each feature are totalled to determine grade. Class A combines Grades I and II AVMs. Class B are all Grade III AVMs. Class C combines Grades IV and V AVMs. The Spetzler Martin Grading Scale estimates the risk of open neurosurgery for a patient with AVM, by evaluating AVM size, pattern of venous drainage, and eloquence of brain location. A Grade 1 AVM would be considered as small, superficial, and located in non-eloquent brain, and low risk for surgery. Grade 4 or 5 AVM are large, deep, and adjacent to eloquent brain. Grade 6 AVM is considered not operable. 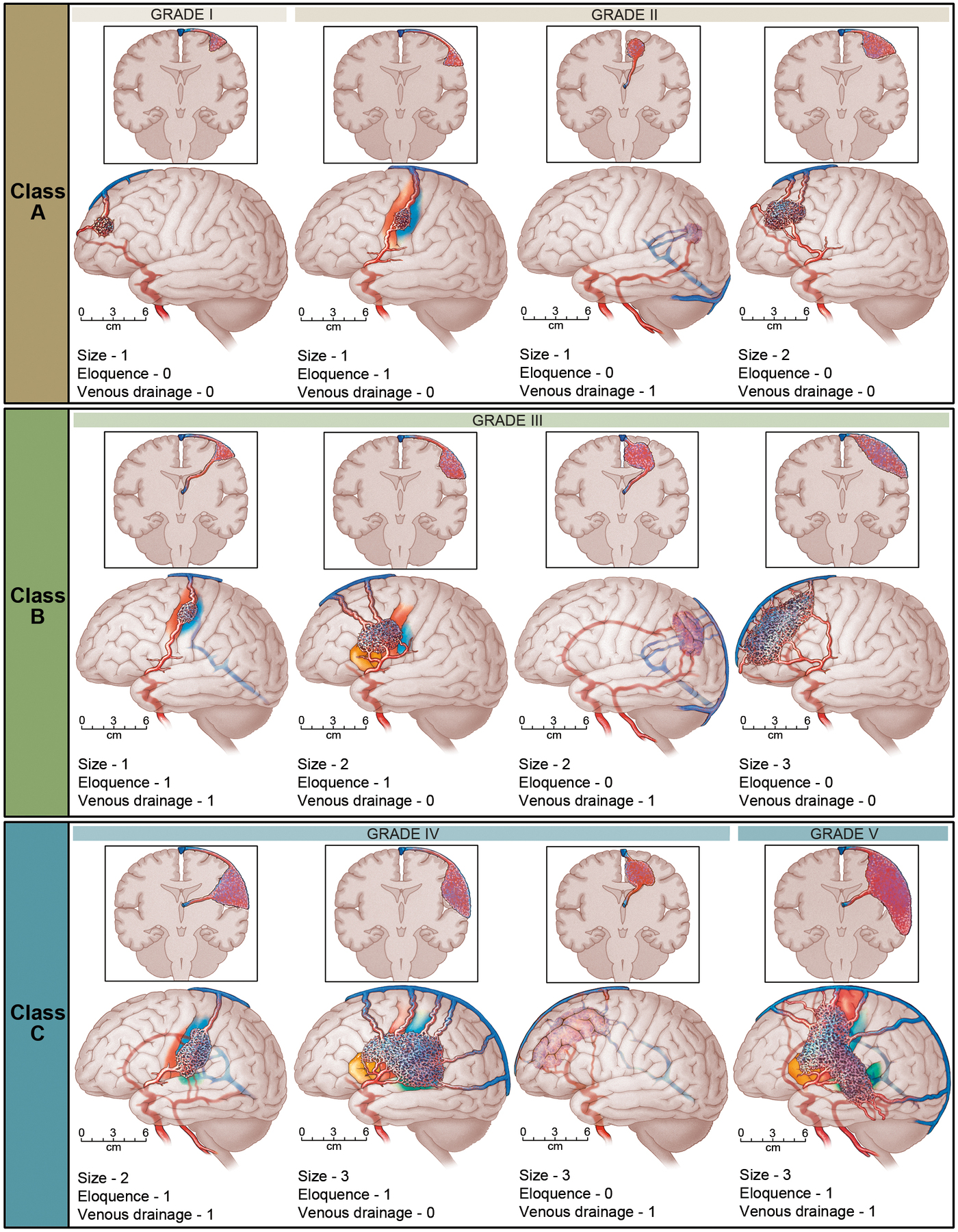 Acute care is either on a stroke unit or an ITU where management is similar to the generic care of those with haemorrhagic stroke. Management is controversial and depends on assessment of the risks of bleeding weighed against the risks of intervention. It is quite possible that undiagnosed AVMS are the cause of what is often misdiagnosed as primary ICH only that the act of haemorrhage and resultant haemostasis and destruction of the local architecture has destroyed the lesion. For those with a diagnosis the aim of treatment is complete elimination of the nidus and the arteriovenous shunt. Partial nidal obliteration does not appear to reduce risk of haemorrhage. Occasionally bAVMS are picked up on brain imaging for other reasons and there is no evidence of previous bleeding. There is a quoted annual bleed risk of 3% but there is a great deal of variability with much higher and lower values for some groups. Risk of bleeding are shown in the table below. There does not seem to be an increased risk of bleeding in pregnancy and puerperium. Seizures are commoner in younger age, temporal and frontal location, superficial or cortical involvement, and nidus diameter >3 cm.

A landmark trial the first randomized trial of intervention for unruptured bAVMs, the ARUBA trial (A Randomized Trial of Unruptured Brain Arteriovenous Malformations) has shown that there is a cost to intervention. ARUBA recruited 226 adult patients (≥18 years old) with unruptured bAVMs between 2007 and 2013 and randomly allocated them to medical management alone or medical management with interventional therapy (e.g. resection, embolisation, or SRS alone or in combination). The data showed that after a mean follow-up of 33 months, the risk of stroke or death in the intervention group (30.7%) was >3 times higher than in the medical management group (10.1%). This and other similar studies may not appreciate the lifelong risks of non-treatment and there is no evidence that risk of haemorrhage falls over time. The trial has been well discussed here.